An important and vital training step~are you more aware of your surroundings, failures, struggles or are you more aware of Jesus? King David, when he was a small shepherd boy spent his whole time conversing with God in the fields as he tended his sheep. However, “out in the world” many people were killed by Goliath and even grown, muscular, warring men quaked in their boots upon looking at the fierceness of the giant. When it was time, that little shepherd boy, whom later became our King, was sent to the battle fields to bring nourishment to the soldiers. Because of the insults that giant dared to rally against David’s beloved God, he ended up slaying the giant with what he was used to, his sling and stones. David didn’t try to be anyone else by using equipment or a means unfamiliar to him, he stood alone with the Lord, he was secure and confident in God’s love for Him and He was intimately connected to His source of Strength because of his devotion and intimate time spent in building that relationship with God, a relationship that was two-sided and fully experienced! David was able to confidently stand before the giant because he was dwelling in the Lord’s strength, not wrongfully trusting in his equipment he used,or his own lack of strength. The Lord had led him there that day and David knew that, David made sure to confidently tell the giant, before he killed him, that God had delivered him into his hands. It was a done deal before the fatal blow came because David actively dwelt with God, heard from Him, and was actively led by Him. And through his Source, with one vital shot, the giant was down. Only God knows the vital shot that will slay your struggle, or battle that you are facing and only He can deliver them into your hands as He did with David. It takes a strong self-discipline, and a strong desire to intimately want to actively dwell with God. You may strongly want to, but are you willing to radically make that change? Again, only Jesus can strengthen you for that free-will choice, and so may you make wonderfully wise, free-will choices today in Jesus! :o) 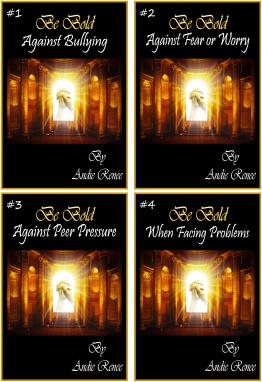 Combines all 4 short eBooks into 1.